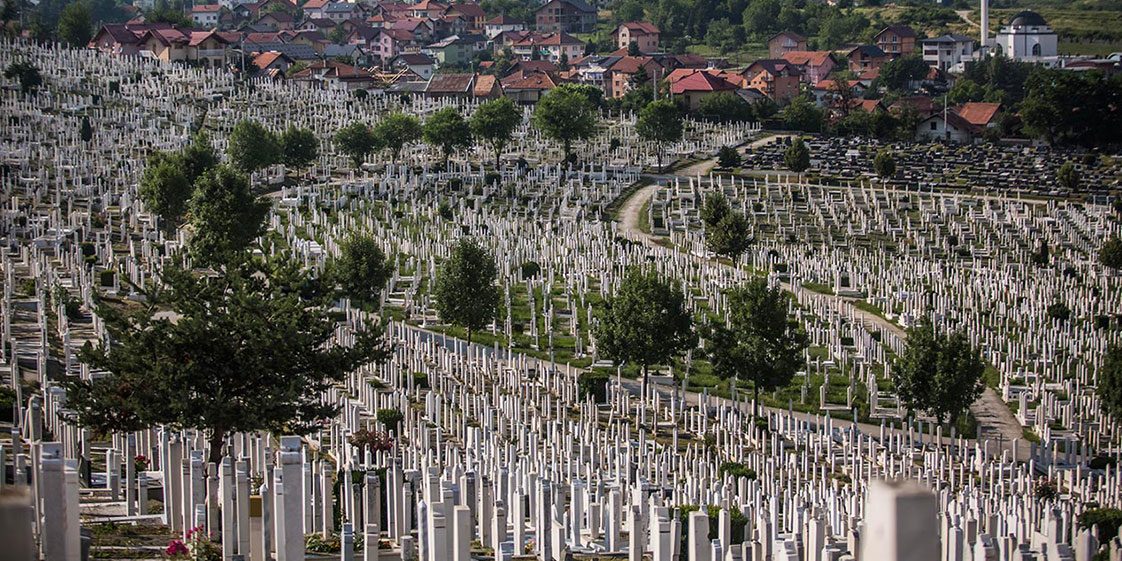 Mir. It means peace in Bosnian. The so coveted peace in a land that has always been spotted with blood. A torn country in which the inter-racial hate is highly settled in, destroying people who are still fighting for human rights, social and economic stability. Even if we do not study this part of History very much, it still actual and alive.

The modern issues started because of the weakening of the Communist Regime and the dissolution of the Yugoslavia at the beginning of the ‘90s.

When the definition of “Slavs of the South” ceased to exist, the deep cultural and religious differences, which through History have marked the whole Balkan population, became crucial.

Bosnia and Herzegovina has always been a particularly variegated multi-ethnic country.

According to a 1991 census, the 44% of its citizens consider themself Mussulman, the 32,5% Serbian, the 17% Croatian and the 6% Yugoslav. Different ethnics, different populations, different geographical and political claims.

That’s why, the day after the signing of the independence to the Yugoslavia, with the strong opposition of the Serbians, a minor assembly of the official Govern, declared the birth of the Republic of the Serbs of Bosnia and Herzegovina. The main purpose of this para-government organization was to occupy all the places with a Serb majority, “purifying” them and then let them join with Serbia and Montenegro as members of the Yugoslavia.

Yugoslavian soldiers left the region after the declaration of independence from Bosnia. However, the majority of the chain of command, arms and military staff with higher positions did not follow the soldiers. As the population polarized, the army did the same and after the establishment of two contrasted armies, the Country was  going towards a devastating Civil War, not able to stop.

Only after three years from the beginning of the War, ONU started its response. Five cities, where thousands of refugees escaped from the villages of the Drina Valley, where the “ethnic purification” by Serbs’ troops had been very violent, were identified. Those mussulman enclaves all around Sarajevo, were called “security zones” and the United Nations engaged themselves in protecting them and sending militar helps.

But the blue helmets did nothing but stare

25 years ago, on July 1995, more than 8000 Mussulman Bosnians, boys and men in military age, were killed by the Serbian Army from Bosnia and Herzegovina. A real slaughter, a massacre, a genocide recognized only by few people. The worst since World War II.

This was happening in Srebrenica, one of the cities protected by the ONU where, in an abandoned factory, they had their soldiers. The troops were Dutch, not that this could make any difference.

The blu helmet’s chief signed a deal regarding the occupation of the city with the Serb- Bosnian military general Ratko Mladic. They shook hands and cheered together.

In a video, Mladic can be seen reassuring the citizens of Srebrenica, while his army was starting to  surround the city. We can see him talking to a mussulman 12-year-old child, reassuring him, while since the day before, the slaughter began behind the building occupied by the ONU. He can be clearly heard saying to the people “We are in the Serbian city of Srebrenica, we are giving this city to the Serbians as a gift”.

Inside the ex-factory, on its walls, there was all the mistrust of the soldiers to an institution, which at first vowed to protect and then abandoned the civilians.

As every year, on July 11th 2020 the Memorial of Potočari, at Srebrenica gates, took place. In addition, apart from the commemoration, the funerals of the people recently recognized were celebrated as well.

To hide the atrocities of their crimes, Serbian military graved the victims in 70 mass graves, then cloaked or moved them to other localities. Often the remains of one single person can be found in three or four different places. Because of this, practices of recognition are still going on after 25 years.

For those who had the chance to have a name, the last stop is the big cemetery which hosts the Memorial. This year, 9 names had been found. The youngest was Salko Ibisevic, 23 years old. The oldest, Hasan Pezic 77.

The investments of the foreign governments that want to be near the citizens after  doing nothing in front of the terrible massacre, have an huge value. The Dutch are the front row funders. However, results of the international commitment struggle to show themselves. The inhabitants are less and less every year. Only the problems stay: lack of workplaces, slow rebuilding of the city and too much rubble still on the streets, fewer and fewer future prospects.

In the meanwhile, not far from Srebrenica, across the border with Serbia, the first European riot since the beginning of the pandemic was born. The post-lockdown crises and the historical tensions of the Balkans led to devastating consequences. People are exhausted and the government is awfully unstable.

In a totally different but still concerning context, everything is again under everybody’s eyes, with no one helping. Are we going to wait until it is too late again?