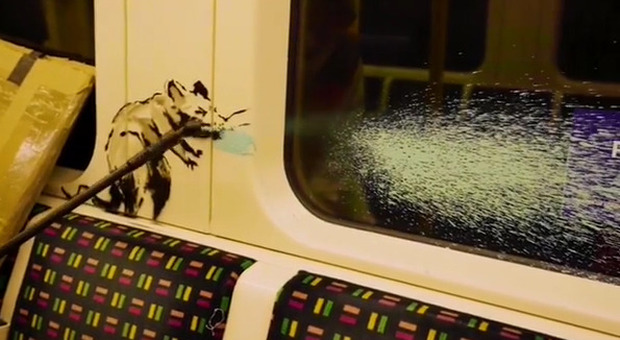 Rat infestation in The Tube

It is not strange, in the historical period we are living, to attend unexpected events. And when it comes to the unexpected, the British street artist Bansky is always just around the corner.

This time he disguises himself as a sanitizer, takes up a pressure sprayer and makes a video on Instagram called “London Underground – undergoes deep clean” lasting one minute, followed by a short caption “If You Don’t Mask, You Don ‘ t Get “in which he retracts the act of entering the metro.

But be careful, there is a twist: instead of being loaded with disinfectant, that particular tool is instead its magic wand, filled with aqua green paint ready to take part in something unusual.

We are in London, in the Circle Line and here is the artist creating his latest work in front of the camera of his phone: a set of stencils representing mischievous rats (the same ones he had photographed while turning his bathroom upside down during the quarantine ) intent on covering the muzzle with the mask or on the contrary sneezing on the windows of the meter l, some planing using the mask as if it were a parachute, others are trapped in the same.

The final twist is a phrase, inspired by a Tubthumping song, which appears on the station wall: “I get lockdown”, followed by a second writing that breaks into the screen thanks to the closing of the vehicle doors: “but I get up again “.

Clearly being provocative, the artwork immediately caused a stir in the media leading the London transport company to cancel it, treating it as a simple graffiti. Some people talk about the removal as a mistake, but according to the declarations of the transport company Transport of London it has actually been “treated like any other graffiti on the transport network. The job of the cleaners is to make sure that it is clean, especially at this time” and after they added “we would like to offer Banksy the opportunity to make a new version of his message in a more suitable place”.

So if one day you hope to see her more than to go to London, you will have to be content with picking up your smartphone and going to the artist’s instagram profile; safety first!

The only trace that we have of the work to date can be found only on the internet, but in addition to being a pity for Banksy’s work in itself, it is also because the message was washed away under the jet of disinfectant that it carried within itself.

It is no coincidence that the artist chose the English capital as the cradle of this one-of-a-kind work: in fact it was aimed at promoting the use of surgical masks still not mandatory in closed places in England. Submerged by new rules and unknown words, once again art takes on great responsibilities and uses the transparency and frankness of its forms to try to get straight to the point, to communicate the reality of what is happening effectively .

Specifically, think of the nature of Banksy’s art: street art, an artistic expression that goes straight to the point, effective precisely because it is easy to use. It is a provocative and daring, spontaneous art, used to living on city walls and capturing the gaze of passersby with its bright colors and particular figures. Those mischievous mice probably could have been nicer than Johnson in stimulating the English people to protect themselves but apparently they weren’t enough to be left undisturbed in that metro car.