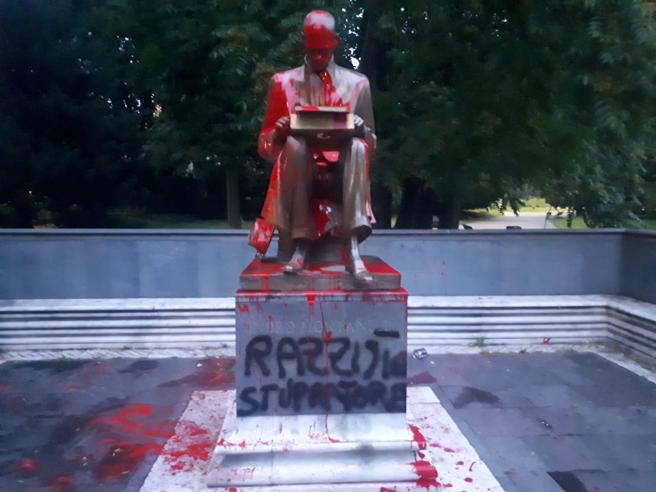 “Montanelli left as usual from the Hotel Manin, where he was staying, to go to the Same building in Piazza Cavour, where there was the newsroom of the Giornale Nuovo, the newspaper he founded in 1974 after leaving the Corriere della Sera. The journalist began to walk along the gate of the Public Gardens, which today house the statue dedicated to him. He hadn’t noticed that two young men were following him and at a certain point they asked him: “Are you Montanelli?” Then one of them pulled a 7.65-caliber pistol with silencer from his jacket and began firing an uninterrupted series of shots: eight. Four bullets landed: three crossed the right thigh, the other pierced a buttock and stopped against the left femur. […] I have a personal memory of the facts. […] I rushed to the wounded man and immediately recognized Montanelli. “Director, How do you feel? ‘I asked while holding my head. “Cowards, they screwed me,” Montanelli said to me. […] It was a miracle that four bullets passed through those “chicken legs”, as the journalist himself would have said ironically, without severing the femoral artery: “Otherwise I wouldn’t be here to talk to you”. The firing group, it would have been discovered, was composed of three brigadists from the Walter Alasia group: Franco Bonisoli, who fired the shots, Lauro Azzolini, both convicted of the kidnapping and murder of Aldo Moro, and Calogero Diana, who awaited the two accomplices aboard a white 128 in via Carlo Porta, on the corner with via Turati. In 1987 Indro Montanelli, during a meeting at the Circolo della stampa, shook hands with his attackers, Lauro Azzolini and Franco Bonisoli, detained on special leave from the San Vittore prison. “At the end of the war,” said Indro, “there are toast between enemies.” On the evening of July 23, 2001, the day after Montanelli’s death, his niece Letizia Moizzi was asked by a doctor from the Madonnina clinic if she could reopen the funeral home because there was a gentleman who could not return: it was Franco Bonisoli, who wrote in the register of condolences: «Thanks Indro. Thank you so much”.”

Not everyone knows why there is a statue of Indro Montanelli in the Public Gardens of Milan. I think this beautiful passage by Dino Messina remembers it well. In light of this story, I would like to clearly and directly summarize my position on the staining of the statue dedicated to Indro.

Whoever smeared that statue is an idiot, or as Filippo Tommaso Marinetti said to Gabriele D’Annunzio “an idiot with flashes of imbecility”.

With flashes of imbecility, I refer to the reasons why the statue was smeared: a logical, complex, witty and dazzling association for which a monument in memory of an attack should be covered with the word “Racist”. Perhaps the authors, anxious not to be seen, wanted to write racists, to condemn the ideological racism of the Brigate Rosse. That “A” must have been the result of haste, I want to hope. The direction tells me that this is not the case, and unfortunately I will have to surrender to the fact that the flashes of imbecility have prevailed.

The protests unleashed by the barbaric murder of George Floyd have transversely resulted in the world in a movement of Orwellian memory: the cancellation and defacement of the monuments of historical figures. In London, the statue of Sir Winston Churcill has even been vandalized. I think Londoners and the British people owe Sir Winston more than the No vax and the phosphorescent imbeciles (this is D’Annunzio’s answer to Marinetti) do to General Pappalardo.

Taking it out on our own story is never a good sign: it evokes seasons of tension and uncontrolled revisionism with potentially terrifying consequences, an evolutionary denial to be strongly condemned and rejected. By the entropy principle things tend to chaos; civil rights and social conquests follow an opposite direction, and for this reason they are destined to leave lives and suffering on the field. Denying the past means condemning those lives and that suffering to oblivion, to the files of the Ministry of truth. Whoever controls the present controls the past.

Among other things, it is the trigger to make it all more incomprehensible: the battle against racism. I’ll state it clearly, racism in the world is a real problem. We should use our energies for the next generations to totally absorb the fruits of an inclusive society where skin color cannot and must not be a discriminating factor, but we must not backdate the battles: it is useless and even empty. Tearing down monuments because they are symbols of colonialism, because the characters to whom they are dedicated could be defined as racists today is rewriting history, a dystopia. The past exercises a function of control and monitoring over the present: it is by looking at those monuments that we have measured and understood the extraordinary leaps and bounds that we have made, the extent of evolution and social achievements. Without a past to deal with, we risk distorting the progress of our civilization.

Here we come to the Montanelli affair. I will try to treat the facts with historical rigor, always in compliance with the principle according to which the battles of backdated civilizations are useless and empty. I start from the story of the controversy and the request to remove the statue of the great journalist.

Indro Montanelli, in Abyssinia, married a young girl upon payment of a fee to her father. In an initial interview with “L’ora della Verità” of 1969 he declared that she was 12 years old, but later returned to the story in an article in the Corriere of 2000, retracting saying he was 14 years old. That of the madamato was a common practice, with which Italian soldiers married Abyssinian girls, who – from an age that today we would euphemistically define tender – were considered women.

Montanelli, says the public prosecution, would never have done what he did to a white girl, and for this reason he is to be condemned as a rapist, racist, a symbol of the white man who predominates over black. I would not have to complain, no one could if we did not frame a fact of almost a century ago with the lenses of the second decade of the 2000s, in which especially western civilizations have made extraordinary progress. The world of 100 years ago was extremely retrograde as regards the conception of women. And this is a fact, simple and stark. What happened in Abyssinia was allowed and indeed considered right and it is not for us a hundred years after to pronounce ourselves on the more or less barbaric customs of a people (I always remember the temporal and cultural factor).

A different matter, this certainly more questionable and open to discussion, is the one so that Montanelli, a white Western and educated man, should not have lent himself to such customs, aware of the almost nothing consideration that similar practices had of the woman.

Perhaps, however, always guilty of using the lenses of 2020, we are not aware of which was, in marriage, the consideration of women in Italy. The civil code of 1865, then in effect, provided pursuant to art.55 that the woman could contract marriage from the age of 15 (not so different from the 14-year-old Destà that everyone surprises). Furthermore, according to Article 63, the marriage of daughters under 21 completely depended on the parents’ decision. We also know that Italy in the early decades of the twentieth century counted among its most widespread customs that of arranged marriage, with which, not so much differently from Desta, women were substantially purchased. Not to mention that the rule that an Italian wife could not “donate, dispose of real estate, or mortgage them without the permit of the husband” was not abolished before 1919,

In light of this, if this is the Italy in which Indro Montanelli was born, everything can be said except that he, cultured and respectful of the woman, out of racism and suprematism had married and had relations with a girl only because she was black. There is no racism whatsoever in the story, a word that is too exploited and which risks diluting the value of serious and important battles such as the American one. Rather, there is a low consideration of the female will, reduced to the mercy of man: an identical condition almost everywhere and which fortunately thanks to so many battles today – at least here – is a distant memory.

I will not speak of “son of his time”, but I continue to support the illogicality of bringing our way of thinking back of 100 years.

Perhaps the most important conceptual junction of the attacks on Montanelli is represented by his non-repentance. He did not regret having married an Abyssinian girl, but regretted having been a fascist, rebelling against that very regime which saw in a local custom a way of perpetrating a praised male and Italian supremacy.

Travaglio, who knew him and has been his pupil, paints a Montanelli who is anything but reluctant to repent.

«In 1937 his report for the Messenger on the battle of Santander, in contrast with the official celebrations of the epic deeds of the Italian troops (” a long walk with only one enemy: the heat “), earned him expulsion from the Party and therefore from the register of journalists, forcing him to expatriate Estonia. In 1943, sought after by the republics and the SS as an accomplice of the white coup on 25 July, he went into hiding and collaborated with the partisans of Justice and Liberty and with the press office of the Cln. In February 1944, while attempting to enter a partisan brigade in Val d’Ossola, he was arrested by the Germans and locked up in the dungeons of the Gallarate prison. And there, instead of claiming his long fascist militancy, he put on the record before the SS: “I no longer belong to the PNF and consider myself at war with you.”

Ultimately, the controversy against Montanelli seems an unnecessary waste of time to get involved in futile and ideal discussions that expose the allergy to mobilize to change the present and deliver a better future to the next generations. The Montanellian affair teaches that the most illustrious characters are humans, and as humans they make mistakes, and it reminds us of an Italy fortunately past and which we hope will never return – in Umbria they have approved measures against drug abortion in day hospital, please be horrified by that – but without which today we would not even have the opportunity to discuss the dubious moral lawfulness of Indro Montanelli’s actions.

As it was said by the great Hegel, a philosopher whose charm will remain eternally unchanged, the antithesis, and therefore negative historical moments, are always preparatory to progress. An essential evil that we should look at without filters.