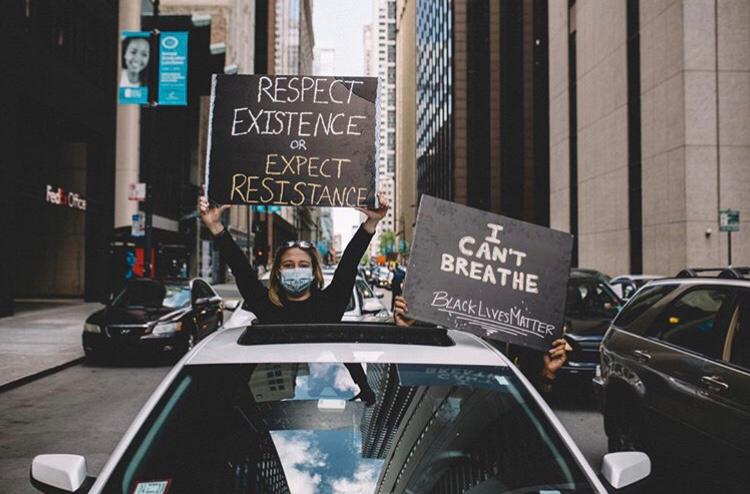 A man, a protest

In the last few days, people’s life all over the world has been totally shaken.

On Monday, May the 25th, in Minneapolis, George Floyd, an Afro-American  46-year-old man, had been held down by four police officers. The dreadful scene was filmed by several witnesses who, screaming without even trying to stop the cops, could have done much or less nothing.

George died under the pressure of a cop’s knee, which was on his neck pushing down, preventing him to breath, while he was begging not to be killed.

George died slowly, defenceless, calling for his mother and praying to be left breathing, not to be killed.

The impotence of the people around them was upsetting. Even in front of such an awful scene, they could not do anything apart from screaming to the cops to let him free. It’s even more shocking their arrogance and total disregard in front of the crowd pleas.

It is not the first time that Minneapolis Police is accused of racism and abuse of power, mostly by Afro American citizens. George Floyd’s episode has again lightened up rage and indignation among people because of racial discrimination.

Minneapolis community organized, from the evening of May 26th, protests against local police and, by today, more than 140 cities has joined the riot.

These protests are very frequent in the United States of America. For example, in 1965 in 6 days of riots in Los Angeles, 34 people lost their life and 1032 were injured. In 2015 in Baltimore, a 4-day-protest led to the death of Freddie Gray, 34 arrests and 15 injured police officers. The list is yet longer.

Racism and arrogance among cops are not only an American issue; so why are these so frequent and popular in the USA?

The reason must be found in a historical and cultural context.

In the United States racism was not only a thought or an ideology of discrimination toward a certain group of people. It was law and so was since 1963 when John Fitzgerald Kennedy, urged on by the protests of the black community, asked the Congress to issue laws that would guarantee equality, especially in voting. The Civil Rights Act passed in 1964 becoming law.

It has been 56 years since that historic moment but, even though human rights are under legal protection, racial differences continue to be a problem in many fields such as work, salary, while looking for an apartment or an accommodation, school system, the way cities are divided and obviously prejudice is still very common among people.

When the system structure is based on discrimination, it is called “systematic racism” which, mostly since the XXI century, privileges a part of the population in a non-explicit way.

There’s absolutely no word valid enough to discuss George Floyd’s death and describe the cruelty of this event. The only thing that we can all do is to think and meditate about it not to forget.

Racisms has always been real in our society. Some are more into the cause, others deny it. However, it still real and no one has the right to ignore it.

If in the last few months we thought that the Coronavirus has made us closer to each other, in the last days we realized how that was only an illusion. We cannot allow us to let our guard down on things like that.

It is necessary to be aware about what is happening and to remember the past, to be informed and to communicate, to discuss and spread equality to defeat racisms in all forms.

It’s important to always remember that behind a face there’s always an history, there’s a person that just like you, lives, suffers, fights for their dreams.

To defeat prejudices we need to go over appearance and social norms and try to empathize with each other. A surely forgotten action that could change the society.

Empathize with other people, ask ourselves how we would feel to be defenceless and how would it be to fight for our rights, fights against all the injustices; that’s the best way to develop a better society.

We may have lost faith in words and in their power. Those topics must be part of our society not to forget our humanity and not to let our guard down; racism, sexism and any other kind of discrimination will never disappear just ignoring it. We must start from raising awareness.

Nothing can change that George, just like many other people in America and from all over the world, is dead. The only thing that we can do for him is to remember him. Remember what happened every time we see a discrimination, verbal or violent racism, but most important we cannot be indifferent, we must react in any possible way.

No one can feel excluded. We are all called to fight this battle. Any nationality, any skin color. Men, women, “white” or “black”, we are all part of the same Society.

Any time someone that can make the difference does not do anything, become accomplice of those awful actions.

To the men, as to the women, is asked to be decent and ask themselves if, in front of those racist actions, or in general in front of discrimination, they did anything to avoid it or if they can make something to make it better.

Be indifferent or fake not to see injustices, make you part of it.

The problem is too big not to be seen. We grow up in a world full of unbalanced power, but we cannot be scared to raise our voices for truth and equality.

Believing that black and white people must have the same rights is an essential condition in a democratic society, but it is not enough to make it real. Because of that any one of us must fight for this, and not let it go just because it “doesn’t affect you” personally.

George Floyd is now part of History. And History that Monday, May 25th was marked by an inhuman, violent deed.

George, as many other, was unfairly murdered and no one can deny it. He won’t return, but his death won’t be vain if it will help to arise people humanity.

“In a racist society it is not enough to be non-racist, we must be anti-racist.” Angela Y. Davis.